FYHA is excited to announce the hiring of our new Executive Director, Jeff Nygaard, and Hockey Director, Nate Metcalf!

Jeff Nygaard is beginning his first year with Fargo Youth Hockey Association, serving in the capacity of the newly created position of Executive Director.  Jeff will be responsible for the overall operations of FYHA, overseeing the administration and the development and implementation of a strategic plan. He will also oversee tournament management, fundraising, marketing, FYHA staffing, organization compliance, community outreach and communications.

A native of Fergus Falls, Minn., and a 1990 North Dakota State University graduate, Jeff is not a stranger to the Upper Midwest hockey scene.  He got his start in NCAA athletics as a sports information director at The Citadel, William & Mary, and the University of North Dakota. In 1996 he transitioned out of college athletics and focused solely on hockey.

Over the past 20 years he founded and served as executive director of the Northern Virginia Scholastic Hockey League (1999-04), the Ashburn Xtreme Hockey Club (2001-05) and the Eastern Hockey League (2012-16). He also owned and operated the Washington Little Capitals AAA hockey club in addition to the Washington Junior Capitals and Washington Junior Nationals 20U teams from 2006-11.  During the 2016-17 season he served as Commissioner of the United States Premier Hockey League, which is the largest amateur hockey league in North America.

While serving in the above capacities Jeff has also operated his own sports management company titled Sports Front Office, which assists clients with day-to-day operations of programming, financial management and compliance with municipalities and local taxing authorities.

On the ice, Jeff played high school hockey for Fergus Falls High and collegiately for Fergus Falls Community College and briefly for the Bison Hockey Club.  His officiating career, which began in 1979, spanned 25 years and included more than 1200 Junior, college, and minor professional assignments. He was also chosen to officiate four USA Hockey national championship games prior to hanging up the skates in 2008.

In the boardroom, Jeff has served as a member of the Potomac Amateur Hockey Association (USA Hockey Affiliate) and USA Hockey’s Junior Council. 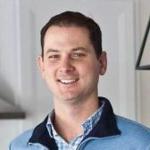 Nate Metcalf is a native of East Grand Forks, MN.  After graduating high school, he went on to play two seasons for the Fargo-Moorhead Ice Sharks (USHL).  Nate spent the next 4 years as a student athlete at Minnesota State University, Mankato (WCHA) and received his degree in Management Information Systems/Business Management.

Since planting his roots in Fargo with a career as a Business Systems Analyst for CHS, Nate has been involved with Fargo Youth Hockey in various roles including level director, board member, and coaching, and is the head coach for Davies boys hockey.

Nate and his wife, Jessica, have four children (Breckun, Duncan, Lachlan and Vayda).

Jeff and Nate are looking forward to working with our hockey community and will start full-time in June.