The staff of the Fargo Youth Hockey Association works both at HA Thompson Arena and in remote settings.  Each staff person has posted office hours below for Board Members and/or FYHA general members to set up times to discuss topics.

Please be respectful of the in-season work schedules and communicate via the information below should you desire to speak with a staff member.

Click Here To Schedule A Game With The Freeze 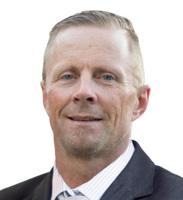 Jeff Nygaard became FYHA's first-ever executive director in April of 2021.  In this role he is in charge of ensuring the day-to-day operations of Fargo Youth Hockey, Inc., are running smoothly while overseeing the FYHA staff.

Nygaard is a Fergus Falls, Minn., native and a 1990 graduate of North Dakota State University.  He has more than 30 years experience working in college and youth athletics administration.  He is a former sports information director at the University of North Dakota, a former owner/operator of two youth hockey clubs and he helped create and serve as the first executive director of the Eastern Hockey League.  On the ice he also officiated more than 300 minor professional hockey games and four USA Hockey National Championship contests.

Nate Metcalf has been the FYHA Hockey Director since May 2021 after many years of serving as a volunteer coach in the organization.  As Hockey Director Metcalf is charged with overseeing the competitive and recreational programming for FYHA.

As a collegiate player Metcalf played four years of NCAA Division I hockey with Minnesota State-Mankato before embarking on a five-year professional hockey career that concluded in Germany.

He resides in Fargo with wife, Jessica, and they have three boys and a girl who all play with the Freeze.

Jodi Hanson has been the Administrative Director with FYHA since October of 2012 after several years volunteering as a team manager or fundraising coordinator for one (or more) of her kids' hockey teams.  She could also be found assisting with tournament preparations for the Freeze prior to being hired.

As Administrative Director, Jodi is responsible for answering calls and correspondence along with providing information to members, teams, coaches and the general public. In addition to her general administrative duties she coordinates with the Fundraising and Tournament Directors on many projects along with preparing and working on special events for FYHA.

A native of Fargo, Jodi attended NDSU. She is a former owner of an in-home daycare and has more than 20 years of office experience.

She and her husband, Brian, have four children and a son-in-law:  Madison (Adam), Wyatt, Owen and Keegan.

Matt Weis has been the FYHA Tournament & Sales Director since August 2021 after interning for the association back in 2019-2020.

As Tournament and Sales Director, Matt is charged with the overall planning of tournament operations and as well as sales and sponsorships for H.A. Thompson & Sons Arena and our tournaments.

Matt grew up in Inver Grove Heights, MN, where he went to Rosemount High School.  Matt graduated from NDSU with a degree in Sport Management in May of 2020. Matt has worked with youth in a child care setting for five years.

Matt currently resides in Breckenridge, MN with his wife Abby and their yellow lab, Brinkley.

Brady Vander Velde has been the Director of Operations for FYHA since August 2020.  He began his career in operations after attending school at Minnesota State University Moorhead.

Brady has more than 12 years of extensive experience managing hockey and event venues.  In his role with FYHA, Brady manages the H.A. Thompson & Sons Arena., which is owned and operated by FYHA.   He is also in charge of the practice, game and in-house schedules for FYHA and its partner facilities.

Brady owns a home in Fargo and enjoys spending time in the lake area with his friends and family.

Wyatt Hanson began joined the Fargo  Freeze as a full-time employee in June 2022 but he has been a part of the FYHA family for many years.

Wyatt grew up playing for the Freeze and has been employed by FYHA for the past three years as a facility assistant.  In his new position Wyatt will serve as assistant facility manager and also fulfill a house-based role in the hockey operations department.